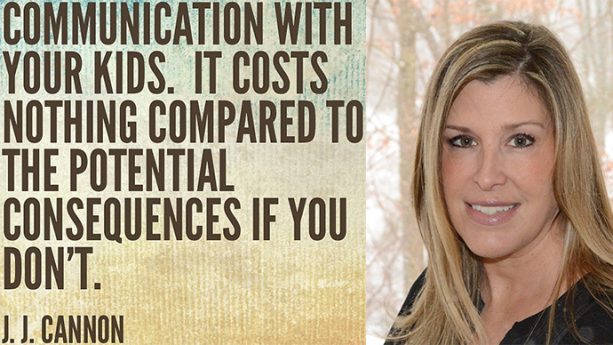 ASKfm is celebrating Internet Safety Month in June with a Q&A series offering different perspectives on some of the most-talked about issues relating to teens being smart and safe online. Today’s post comes from J.J. Cannon, social media expert and author of @Sophie Takes A #Selfie, discussing her views on the value of social media for today’s teens and how she channeled her passion for social media toward helping parents and teens navigate the ever-evolving space.

How did you become so interested in social media and, in particular, passionate about teaching kids appropriate online behavior?

In 2009 I met a group of women inventors and entrepreneurs, often referred to now as “Mompreneurs.” We auditioned for an unfortunately short-lived show called “Homemade Millionaire,” which aired on TLC. As a result, a couple of us began blogging about the experience, sharing information and updates about the show and its contestants. From there a mutually supportive, socially connected community was born as we all dove headfirst into the Twitterverse. After requests to write press releases, magazine articles and help with social media management, it became clear that I had a natural knack for connecting and promoting on social media.

Around the same time, there was a selfie boom happening, especially among tweens and teens, and I began hearing stories from friends about online “mean girl” behavior. One day, I said casually to my husband, “Someone should write a book about that. You know, like a book of etiquette for social media.” His response was instant, “That’s what YOU should do. That’s the book you need to write. Do that.” It really was all about timing, and if I hadn’t gone to that casting call, I probably wouldn’t have jumped into social media at that time. I quickly recognized the way that Twitter in particular levels the playing field, allowing everyone to connect and be as accessible as we choose to be. It is such a powerful tool and I am grateful to have connected with some incredible people there.

What do you tell your own kids about how they should conduct themselves online?

There are lots of really positive things about social media but there’s also a really dark side. I tell my kids that there is no such thing as privacy online — there’s an illusion of privacy. I remind them constantly that whatever is said online, whether through a “private” direct message or public post, can be captured via screenshot and shared endlessly. You never know what can go viral.

Kids don’t think about the ugliness that can come from being online. To them, social media is simply fun and the way they keep up with their friends. But there are pedophiles out there posing as kids or hiding behind innocent looking profiles. It is so easy for them to mine through photos, which many of them collect and save to share on websites buried in what’s called the “Dark Web.” For that reason, the rule in our home is if you don’t know the person in real life, you’re not allowed to be connected with them online. There are exceptions to that of course, like when my daughter wants to follow Taylor Swift, or well-known organizations that provide great role models for kids, like Secret Deodorant’s Mean Stinks campaign or No Kid Hungry.

What is your number one tip for parents when it comes to keeping their kids safe online?

My biggest tip for parents is to put aside the awkward feeling that they’re invading their child’s privacy by looking through and monitoring their phones for online activity. Parents own the devices, and until they’re 18, we’re responsible for what our kids are doing online. Kids should have a certain level of privacy as they become tweens and teens, but I don’t think enough people are physically picking up their kids’ phones and checking in on what they’re doing.

While I don’t look through at my kids’ phones daily, I do “spot check” regularly, and they are aware that this happens. I just went through my daughter’s phone last night mainly to check up on who might be trying to connect with her, and to see that what she’s liking and sharing is appropriate. There have been a few times where I’ve noticed her liking something that, as an adult, I can immediately see is inappropriate, but to an innocent kid, it’s not obvious… because they don’t know. These are all teaching opportunities because the conversation never stops. Even as adults with a certain amount of life experience and street smarts, we make mistakes online.

At what age do you think parents should start talking with their kids about how to behave online?

Because I see 6-year-olds with Instagram accounts, I think the conversation starts the moment you allow your child to start playing or using any device. Realistically, I believe around the age of eight is when it starts becoming important.

What value do you think social networks provide to teens in terms of expressing themselves?

I see value for teens who want to express themselves in positive and creative ways and be able to share their thoughts and who they are with like-minded peers. Becoming socially active is now part of a rite of passage for most teens today who use social networks to feel connected. I think social networks are also potentially valuable to kids who might be having a problem, perhaps thinking they’re alone in their situation, and then discovering a supportive online community.

What do you see as the biggest safety risk on social networks today?

In my opinion, the biggest risk is kids connecting with and potentially meeting up with strangers in real life who could do them harm. I also believe kids sharing too much personal information about themselves.

Online bullying is a hot topic. Do you think kids are meaner to each other today or is a certain amount of bullying behavior almost unavoidable when giving kids a public forum?

Believe it or not, I don’t think kids are meaner today than they were when I was growing up. The difference today is that we see and hear about every little thing from every little corner of the earth thanks to the Internet and the age of social media. Today kids have the ability to take it further because there is a certain amount of detachment and added bravery when tapping out the most epic insults they can conjure from behind a screen. Indeed, it is almost unavoidable. But, I believe that if kids choose to keep their social circles tight and only connect with actual friends, they can avoid a lot of the drama. The reality is that teens and drama often go hand in hand. It’s all part of growing up and we do need to teach them how to handle it if we allow them to play here.

Why do you think teens (or people in general) gravitate toward anonymous features or sites?

I think the idea of interacting with strangers online holds a lot of naturally fascinating appeal for them. We all, especially teens, can be lulled into a false sense of security thinking we are communicating from the safe and comfortable surroundings of our home, friends and family – what could possibly go wrong? If I think back to my 14 or 15-year-old self, I would have loved the idea of feeling anonymous with the ability to say anything. Anonymity is the new virginity, and many kids are giving it away freely without really considering its value and how it could potentially affect their future.

Wait, what?! I cannot possibly pick just one. I’m still a bit of a newbie on ASKfm, but am fascinated and enjoying following Catherine Teitelbaum and getting questions from Jill Eisenhart. Some of my Twitter favs include Norah O’Donnell, Gayle King, CBS This Morning, Bethenny Frankel, Chef Gordon Ramsay, FLOTUS, The Huffington Post and The New York Times.