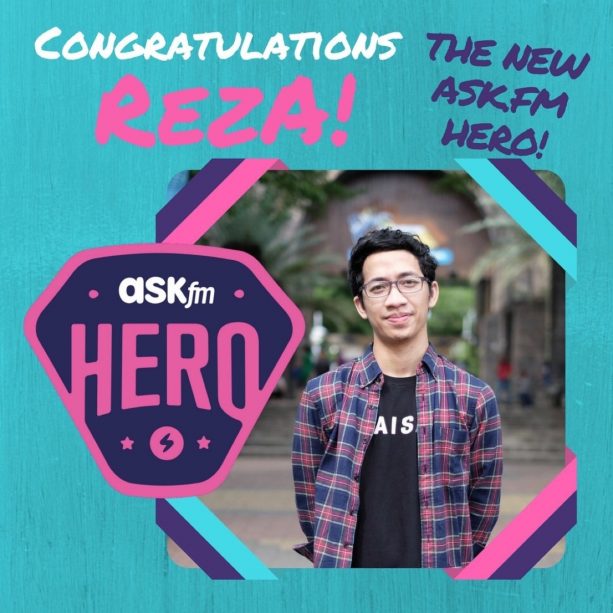 ASKfm has partnered up with The Diana Award to put out the searchlight and find the new ASKfm Hero – a champion of positivity for online community of over 160 million users.

In March 2017 the “ASKfm Hero” competition was launched. People from across the world submitted a one-minute long video, where they talk about what heroism means to them and how they are making the world a better place. 16 entrants, whose videos received the largest number of votes, became finalists, and the final winner and runner-up were selected by a panel of judges.

Winner Reza Pahlevi is an inspiring 27-year-old from Jakarta. In his video he shares footage and photos from the “Charify.FM 2015” event organized by him. He recounts how his initial idea to bring the online community together offline spiralled into an amazing fundraiser with more than 1000 people in attendance and $2500 raised.

Reza’s inspiration came from previous experiences with cyberbullying. He says he hated seeing verbal abuse common on online platforms popular with young people. Of his role in turning this around he says, “I wanted to make the ambience more positive. I think social media users can be driven by the contents we make. Therefore it’s the influencers’ job to make an impact on their followers and spread positivity so that a positive environment can be built and maintained.”

Reza’s work on connecting people on- and offline has set a high standard for the ASKfm Hero competition. About heroism Reza says, “Heroic things may be very simple – you can just spread information about blood donations, charities and other good things… this is all feasibly done using social media!”

Runner-up, Genta Mansyur, has also been using his ASKfm platform to create change by providing counselling and resources for the lgbtqia+ community of Indonesia and far beyond.

Prizes. In addition to becoming the face of ASKfm, Reza has received $2,000 dollars for a dream event of his own choice, such as flight to his dream destination or Coachella music festival. Runner-up Genta has received a GoPro Hero 5 Black.

Partnership. The competition was organized in partnership with The Diana Awards. It is a respected and trusted youth charity committed to empowering thousands of young people in the UK and Ireland to tackle issues affecting other young people by using a well-tested peer-led approach. The Diana Award has provided criteria for selecting the winner and set the panel of judges made up of Diana Award holders and other young social change-makers.

Alex Holmes, Head of Campaigns & Development for The Diana Award says, “This generation of young people has been demonized for self-interest and negative online behavior like cyber-bullying. This competition aims to shine a light on all the amazing things young people are capable of and give them a platform for sharing them.”