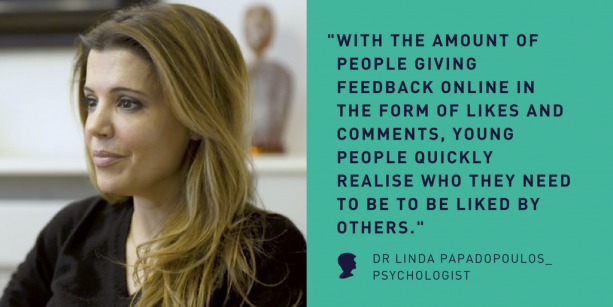 The Diana Award asked young people from their National Anti-Bullying Youth Board to list their top questions about the online world. We posed these to psychologist and author Dr Linda Papadopoulos to get her advice.

Questions from Youth Board

What should you do if you’re feeling upset or stressed about the online world?

The first thing you should do is look at precisely what that stress means. Am I stressed because I’m being excluded? Because I’m feeling too pressurised to answer texts? Am I being bullied on the online world? So you need to be clear and precise about what’s going on.

Once you establish what it is, then it’s about addressing it head on. We know for example that the more you go online to compare, the lower you feel. We also know that while there’s a lot to be gained from having some social interactions online, having meaningful interactions offline and having a good balance of both is also key.

The fact is that sometimes we spend too much time online and we kind of lose perspective about whose opinions matter and how much. So I think the key is 1) to identify specifically what it is that’s upsetting you, and 2) act upon that thing. Whether that means spending more time with friends offline or minimising the amount of time you spend reading comments, or it can be involving the other person if it’s something like cyberbulling or trolling.

Should you be worried about what people would think about your posts on social media?

I think it’s natural to be worried, but the idea that you’re ever going to get 100% positive posts is ridiculous. I think you need to post with the expectation that there will always be people out there who aren’t going to give you the response you want. There’s a lot of psychologists and theorists who describe happiness as the differential between your expectations and your reality. So I think in this case you need to really manage expectations. Once you decide to be on social media you need to expect that there will be unpleasant comments because that’s the nature of it: you’re exposing yourself to people in situations that you wouldn’t normally.

It’s inevitable that once you post you will be drawn to looking at what’s out there. But I think you can counter that by A) thinking ‘what is the source’, and B) thinking about what your agenda is and managing your expectations. Because if your agenda is ‘I want everyone to love everything I post’, then you’re setting yourself up to fail. 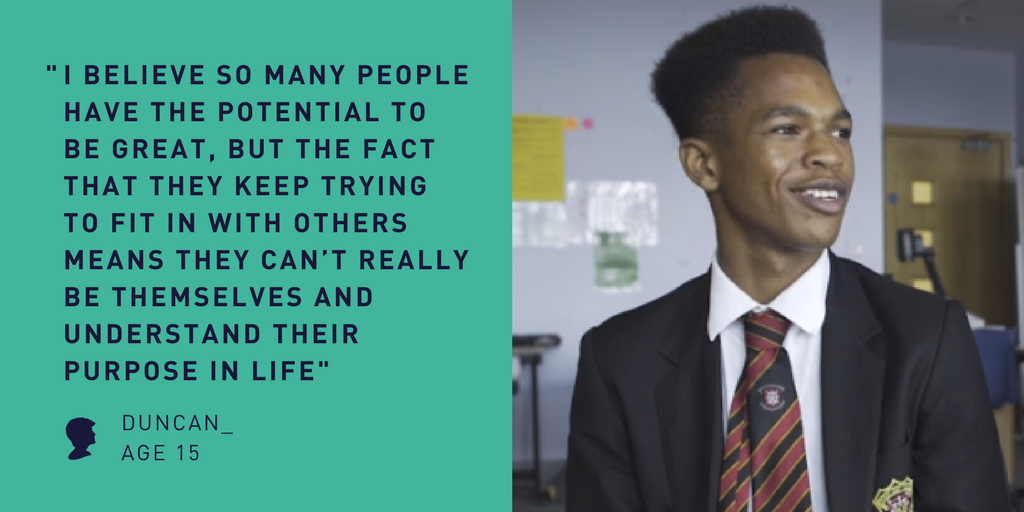 If you feel overwhelmed by all the information and news online and guilty about what you see online, what is the best way to deal and cope with that?

So what that does is it causes you to lose perspective. What happens is that in the online world you can find an abundance of nuanced information and you see it as the norm. It’s important therefore that you’re careful of echo chambers – places that merely reflect your opinion back to you rather than challenging you and getting you to think more effectively about your views.

It’s important to have a healthy media diet and I actually think it’s important to read things you don’t agree with. Having that varied diet will give you more perspective. Guilt in and of itself is a negative emotion – if there is a cause you’re interested in, instead of reading about the enormity of, for instance, world hunger, go and volunteer at your local food bank. If you’re feeling guilty about not spending enough time with your grandparents who live far away, volunteer at a helpline for the elderly. There are things you can do. Instead of just looking at problems, try and find some solutions. I think that will help with not only the guilt but also the perspective.

What role should social media sites play in helping us cope with these issues?

What we have to remember is that a lot of these sites are ‘children’ themselves: Facebook is a teenager, Snapchat 6 years old, Twitter is  11 years old, and they’re all learning as they go along. The important thing is that we make these sites aware of what we need. One of the things that’s really useful, for example, is reporting when one is feeling uncomfortable or one is being bullied. Social media sites need to take some accountability there.

I think that also social media sites can’t hold their hands up and say ‘oh no, we’re like the radio, we just put stuff up’ – there has to be a sense of accountability that if they’re putting up content that can negatively affect younger people, there have to be some barriers to accessing certain material.

The most important thing that social media sites can do to help us cope is to listen. I remember when I started out in the industry there was a lot of concern about online pornography. There still is, but I think that’s been taken over to some extent by concern about the online bullying world and with social comparing. As we all become more used to using these sites, different social and psychological issues are going to arise. So the best thing that social media companies can do is listen to what those issues are and invest resources and time in addressing them.

What can we do to try and ensure our child does not access inappropriate sites on the Internet?

There’s actually a lot you can do in terms of the practicalities of going online now. There are some wonderful filters provided by Internet Service Providers. There are also practical things you can do: you wouldn’t let your children watch a movie unsupervised or play a sport they’ve never done before – likewise, be around them when they’re online. Ensure, especially when they’re young, that they’re around you when you’re online. I think there’s also a question around when you decide to get them their own phone because up until that point they have less access to it. Speak to them about why you’re trying to avoid them seeing these things, explain to them about how when they’re not emotionally or cognitively ready it can affect them, so they can have an idea rather than just saying ‘well I’m not allowed’ they ask ‘well why aren’t I allowed?’ Have these discussions with them.

If they do see something inappropriate online, have an open enough forum with your kids that you can discuss these things. What you don’t want to do is make them fearful of being able to tell you. I know that’s a tall order but you need to say ‘there might be something you stumble upon and I want to be the one to explain it to you’. If you explain to them, they will be receptive. 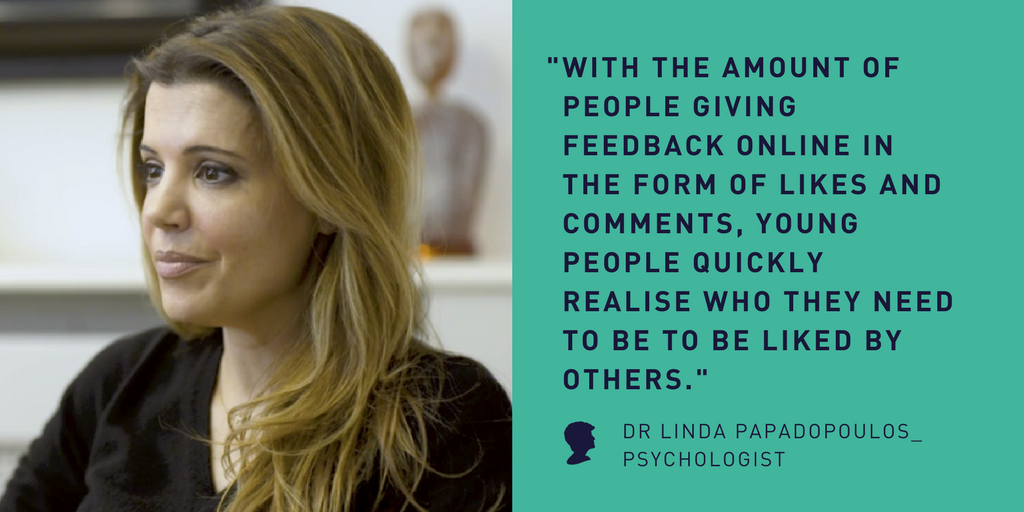 Is it appropriate for parents to monitor their child’s online social media accounts?

I think absolutely it is, especially when they’re younger. I think like anything you go from monitoring, to trusting, to  ultimately getting them to a point where they are self sufficient so you can let go. But you absolutely need to monitor in those first instances. When kids first start using social media, you need to be really open with them and say ‘I know it’s a part of your world but I need to be on top of it so I can help you, so I need access to your account’. Those are the terms of the agreement, in the same way that when they got a bike they had the training wheels and once they were stable on that bike you would let go. It’s the same thing.

I think what’s really important to know here is that the conversations you would have with an 8 year old would be very different to the conversations you’d have with a 15 year old. If you have a child of 15 or 16 hopefully you will have done enough so that you feel they’re OK on these platforms on their own. But the work needs to be done by checking in with them, discussing why they post, what they post, getting them to ask you questions, when something does go wrong, talk to them about why and how to rectify it, allowing discussions about when and how to seek support online, really go into the intricacies of these things with your kids.

So what you’re doing is giving them enough literacy so that they know about their digital footprint, about bullying online, dangerous sites they can go on, echo chambers, about people stealing their data… How do you increase confidence? You do it by doing things you never thought you would do but with someone around you ensuring that you don’t fall down when you try them. And that’s what your key function is as a parent, I believe. 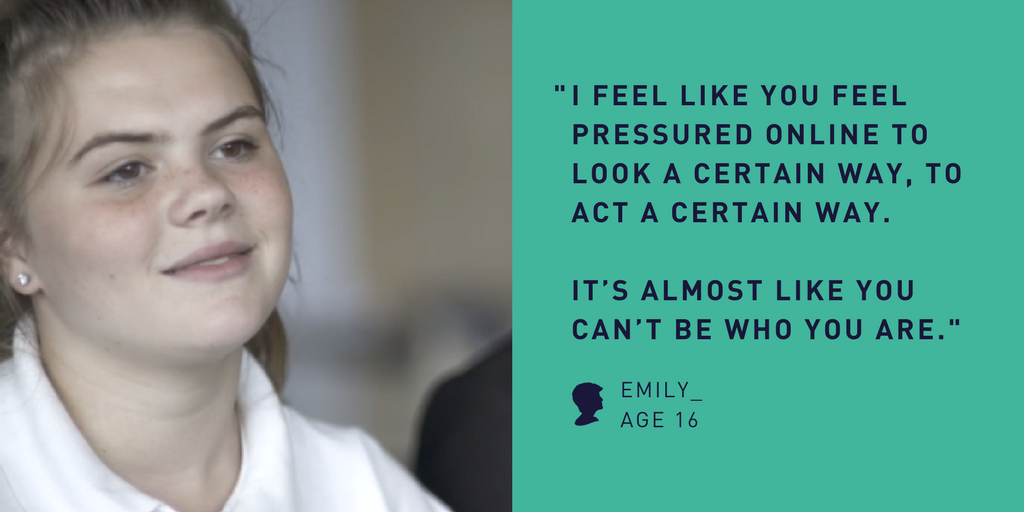 Is it not inevitable that despite your best parenting skills, your children may end up innocently contributing to negative behaviour/ language because they want to be up to speed with all the “cool social media sites” and seen to have an opinion similar to their role models?

Absolutely, there is always the potential for that. As a society and as educators and parents we need to be not so quick to jump on the bullying bandwagon. I think kids do make mistakes. It’s about separating who your child is from what your child does: this is true of anything they do in life. Doing a bad thing is much easier than being a bad kid. So the language you use to monitor and police your children is really really important, especially when it comes to the online world.

I think also understanding that we’re all in this huge social experiment called social media and we’re all learning as we go along. There is an inevitability that things might not go as we planned. But it’s important to keep perspective, and I I do think having that open forum for discussion, even when they mess up, can help explain that A) there’s always something you can do to feel more in control of a bad situation and B) not vilifying them or allowing them to vilify themselves.