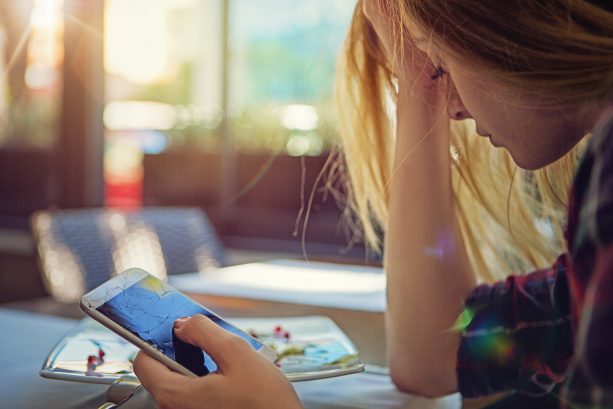 Social media is amazing. It allows you to connect with new people all over the world. When you are anonymous, you will find it easier to ask those deep questions that help you to get closer to your good friends. However, life isn’t always great, and young people use social media apps to share the difficult stuff, too.

We know that when people are anonymous online, they start to do and say things spontaneously and without thinking. This can serve as a great outlet if you’re having a hard time at school or with your friends and family. It can also be a great way to explore who you are, what you like and what you don’t like.

When Anonymous Apps Get Complicated
That said, our use of anonymous apps can get complicated, when we start to send messages to ourselves. This is not as strange as it sounds. After all, plenty of people, even highly successful people, can often be caught talking to themselves. It’s like having a conversation with your own inner being, thinking through difficult issues or problems. Sometimes, it’s a way of trying to build up confidence or courage, and to motivate yourself to go do something.

Here at ASKfm, we have noticed that not only do people say only positive things to themselves, but at times they also send themselves unkind, hateful and bullying messages. Why in the world would anyone do that? That’s a good question.

One thing that makes us feel good is the sense that we are in control of at least something in our lives, and we have friends and family around that listen and support us. Yet, sometimes instead of getting the support we need, we feel that we are under a great deal of stress. When everything in our lives feels like it’s going out of control, we might do something we know will make things even worse. All that frustration needs somewhere to go, and when it can’t go anywhere else, we start to take it out on ourselves and even end up hating ourselves. This happens quite often when people become depressed, frustrated and anxious.

Hate Never Makes Things Better
ASKfm strongly believes that by respecting each other we feel better about ourselves and others and we have better time. That’s why hateful comments will be removed from the site, as they make nothing better. We can get angry and upset about important issues, but that doesn’t mean we should turn our passions into hate.

ASKfm will also remove hurtful and hateful comments, even if you send them to yourself. You might think that sending such comments to yourself is not such a big deal and that it is just a way to cope during a difficult time, but when you see hateful remarks, no matter who wrote them, they starts to chip away at your self-esteem, and somewhere inside we can start to sense that it’s real.

Looking for Support
If you are writing hateful messages to yourself, ASKfm wants you to reach out, if you need, and seek support to help you through difficult and bad times. That might not be what you want, but it is better than blaming yourself when times are tough. ASKfm wants you to be and to become the person you want to be. Some people can send themselves hateful messages as they think it will sort out problems with friends, or even help them to get new friends and followers. It might, but then such friendships would be built upon something rather fake and complicated. So, we invite you to take a look here for tips on other ways to make friends on ASKfm: http://support.ask.fm

There is help available no matter you are located. Look for helplines which support young people in your country:
http://www.childhelplineinternational.org/where-we-work