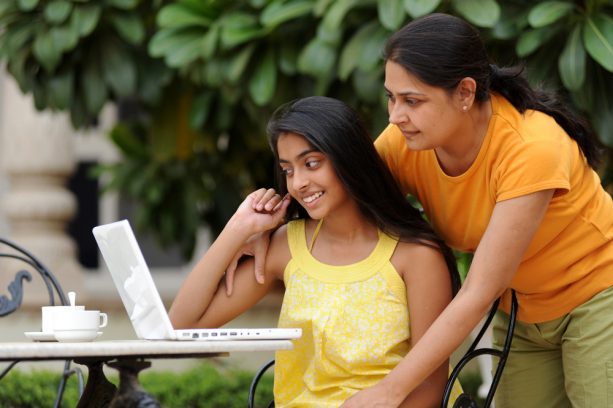 There has never been a time in the history of humankind that teens have had so many options in regards to what they view and experience, as well as how and with whom they share it. As of the end of 2014, the UN estimates that over 3 billion people will have access to the Internet. This platform is where social media resides, and teens, today, have never lived without it. Just as we can’t imagine life without electricity, automobiles, or telephones, teens can’t imagine friendship and human interaction without social media. Social media is how they express themselves and emotionally connect with others. That is why preparing youth to thrive in their digital culture is one of the most important jobs we, as parents and educators, have today.

This became very clear to me as a parent, when my 9th grade daughter’s Facebook account was hacked. When she walked towards me, holding my laptop, ashen faced and visibly distraught, I prepared myself for the worst. I thought one of her friends must have been killed in a car accident or had their parents pass away unexpectedly. I was genuinely stunned to realize that the pain and shock were caused by a spammer. Her account had been hacked, and messages were being sent out from her profile by an unknown cyber hijacker. What upset her most were the comments posted by her friends, visible to all, which she could not control or reply to. It was as if the sky were falling, and her world was coming to an end. I learned that interacting on social networks, to my daughter, was not just an activity for entertainment or diversion, but rather an integral factor to her well-being. Social media was a critical connection to her peers. Sitting side by side, we located the “report abuse” feature and filed a report. Within an hour, she regained access and could correct the misunderstood messages. That experience was a paradigm shift for me. That was the moment I knew that parents and educators needed to be available and supportive.

The Internet, our society, and social media have become so intertwined it is almost impossible to remove a young person from it without removing them from their community as a whole. Such ostracism could have significant emotional consequences for teens, even to the point of isolation. Even at school, students arrive, each morning, with yesterday’s digital interactions impacting their mental, physical and emotional capacity.  Throughout the day, they will continue to interact with each other via the web. Even when social networking is not allowed on campus it is often used with smart phones and mobile devices. For this reason, schools too must be proactively engaged in students’ digital lives and be prepared to respond to digital issues.

The biggest difference in kids growing up today, compared to when we grew up, is that they drive their own digital experience. Their media is not dished out to them by a select number of executives with the power to create, promote and distribute pre-selected content for the masses. When teens use social media, they want to participate, to be heard, seen and validated. They gather web images and create extensive photo galleries to pin and share. They throw out questions into the “web universe,” and expect a reply. They publish unique content and playlists and post comments. They collaborate in online communities to code, write stories, share videos and contribute art and music.  They play complicated, social games that require a guild or team to compete. They rate and review everything, from teachers and schools to movies and local hangouts. Ultimately, teens post, share, tweet, pin, and play with a potentially global audience. This is both a potential liability and a great opportunity. It amplifies one voice and gives it the power to have a positive, or negative, effect on real people and real lives.

As parents and educators, this places a heavy responsibility on us to help prepare and guide teens as they navigate this new and sometimes difficult digital terrain. As teens define who they will become we can either be there as guideposts, helping them see the effects of what they might post before they post it, or we can let them embark on their own with real world and potentially long-term ramifications. There have been cases where teens have successfully intervened to prevent a tragedy. There are also sad tales of youth promoting behavior that harms themselves or others. Teens will not learn to be ethical or responsible by accident or osmosis. Without conscious effort on our part, we will miss the opportunity to guide and support teens while they are developing their habits and expectations for interactions online. By not engaging with youth about social media, parents and schools lose the opportunity to help them gain the skills and build the emotional resiliency they will need to succeed in our increasingly digital culture. Our charge is to teach the skills and competencies and illuminate the choices that lead teens to rewarding lives full of opportunity. By relating to teens the positives and negatives of social media and knowledgeably creating and communicating our expectations for online interaction, we can build a network of support for them both on and offline. In upcoming articles, I will share tried and true actions for parents and schools to assist them in this endeavor.